How is this site moderated, and what can ordinary users do?

This site seems to have lots of rules, written and unwritten. Of course spammers and trolls are pretty rare, and discussions usually stay on-topic. This must take a lot of moderation. Who does the moderating? Can ordinary users help?

The site has been carefully designed by the folks at Stack Exchange, Inc. to be self-moderating. Self-moderating means that ordinary users do the vast majority of the work. There are moderators (the site puts diamond symbols "♦" next to their user names), who are volunteers and not employees, that have special powers that they use as seldom as possible. But most of the work of moderating the site is done by ordinary users. I find that this philosophy fits very well with the spirit of amateur radio, which is also largely self-regulating.

For instance, there are indeed "bots" (automated computer programs) that watch for spam posts, but moderation works so well that typically the bots wait for a human user to flag a suspicious post as spam before deleting it. In that way, the occasional post that an algorithm would incorrectly mark as spam is not deleted unnecessarily. That particular system works very well: spammers do occasionally post, but the spam gets removed so quickly that spammers have mostly given up posting here.

If you've found your way to the Meta site, then you probably know about reputation points. The help page about privileges lays out what a given user can do, given their reputation points count. Here's an incomplete summary:

The material in this post has been shamelessly adapted from a blog post entitled A Theory of Moderation, which was written by one of the founders of Stack Overflow and Stack Exchange. Some of the details are a bit out-of-date, since the post was written back in 2009, but the philosophy is unchanged.

So if you've been wondering if you can help and you have enough reputation, dive in! Flag posts that don't look kosher, vote posts up and down, welcome new users, post comments, and so on. There is an important rule: treat everyone with respect. There are finer points to guidelines about some actions; if you have any questions, our chat room the "Ham Shack" is a good place to ask. (You can talk about just about anything in the Ham Shack; the rules about being pertinent to ham radio and being an answer to the question don't apply. You must have at least 20 reputation points to participate in chat.)

"Normal" (by which I mean non-moderator) users can do pretty much everything a moderator can, except that there has to be a consensus. For example, a moderator can close a question or delete an answer, but so can normal users if enough of them agree that it should be closed.

When a moderator closes a question, it takes effect immediately, and some discussion will follow if other people feel that the question was wrongly closed.

Moderators are usually normal users of a site for some time before being elevated to become a moderator. In my case, it was at least three years. Generally, I try to be hands-off as much as possible, only stepping in to do something if an unusual situation has arisen.

So my answer to this question is: Mostly, this site is moderated by its users, with a few (currently three) moderators who can step in in extreme circumstances.

Most of the moderating should be done by folks that are not moderators.

Where are the downvotes, etc. ? A moderator has his hands tied here! I am only allowed one downvote, just like everyone else. We need help, peoples! Please. :-)

For one thing, there are a lot of answers and comments that are just plain wrong. They should be flagged, downvoted, and commented on as such. Then, a moderator or the Community bot can remove them. 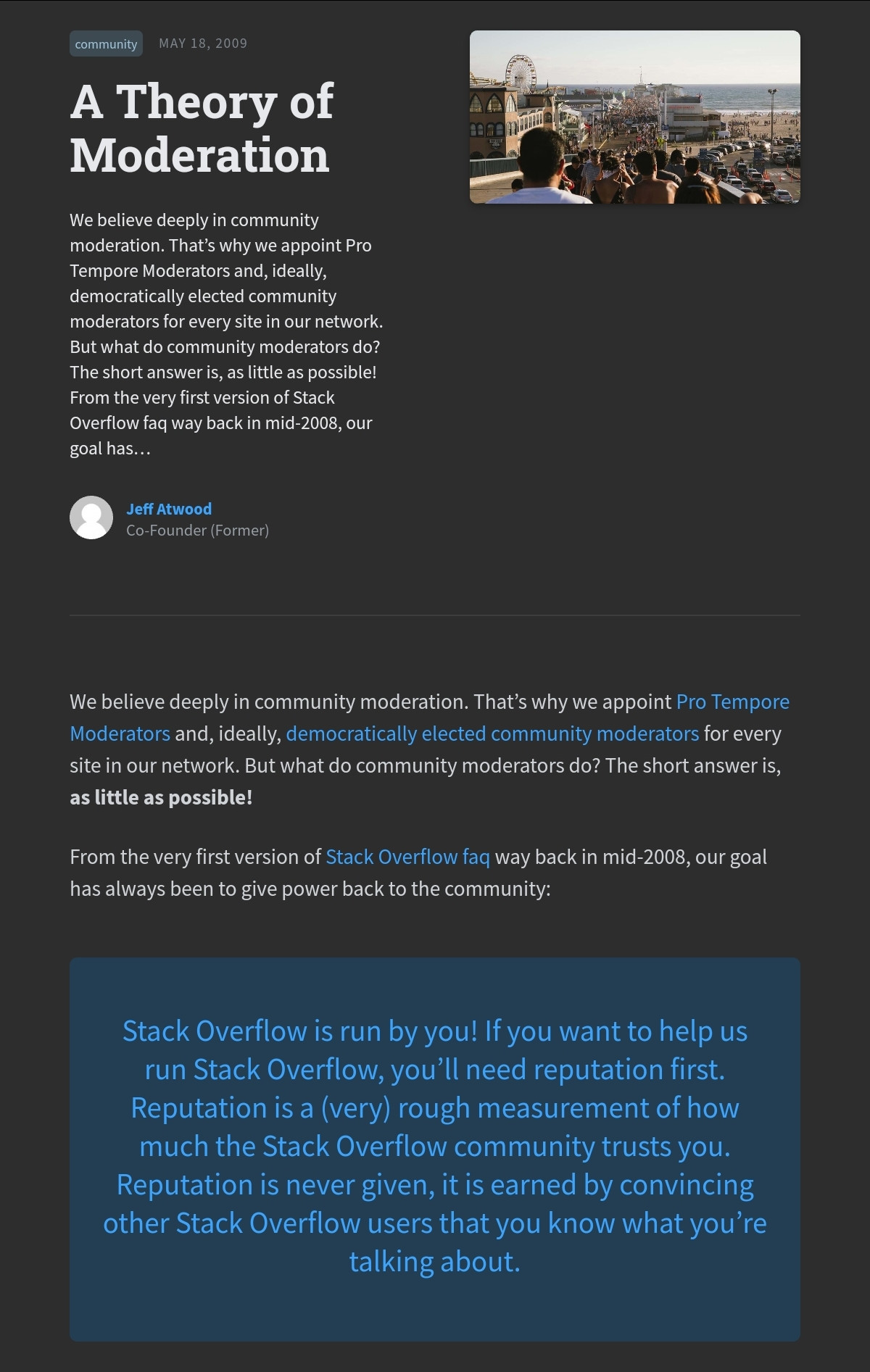 Not the answer you're looking for? Browse other questions tagged discussion featured moderation .

The Overflow Blog
Featured on Meta

8
Who should the moderators be?
5
How can I build a _____?
0
“Core Users” Posting leading questions and answering themselves
10
How can we improve the activity on this site?
2
Too late to widen the scope of this SE?
2
Are questions concerning commercial business-band radios allowed here?
3
2019: a year in moderation
2
beta status as of February 2020
3
2020: a year in moderation