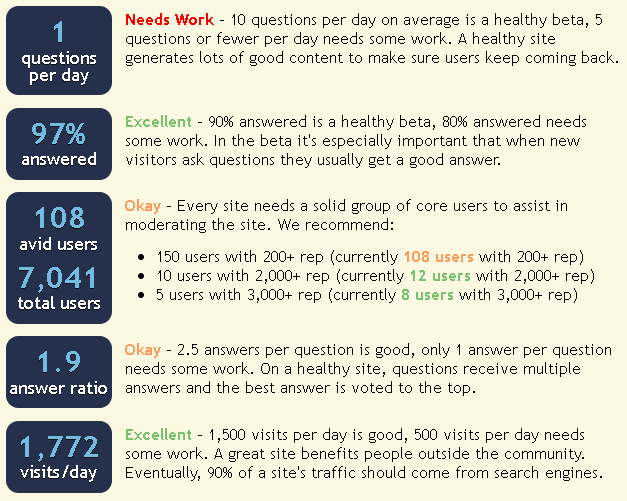 so, what do we need to do to come out of beta ?

The “beta” label really does not mean very much these days. Stack Exchange has been slowly — over the course of years — acknowledging that sites can be small and yet stable, a net benefit to the internet, but there are some leftovers from a previous model where “you must be this big or you have failed”.

Is it bothersome that we have a “beta” label? Yes. Should we make some sort of urgent effort to change our site just to meet some metrics rather than to make it better for its users? No.

Recent related discussion over on Meta Stack Exchange: Let's break up with "Graduation" and remove a bunch of "Beta" labels

In my opinion the "beta" label is deserved for ham.SE, because the site is fairly stagnant. The question rate is just too low. There might be 108+ users with 200 reputation, but how many of those log on in an average day? I would think no more than ten or twenty. (Actually I'm not so sure that "beta" is an appropriate label, but at least it's kinder than "stagnant".)

Part of the reason is that amateur radio can be considered a mostly-mature field, which means that there are few genuinely-new issues to be discussed; many of the questions about amateur radio in general have already been answered. This is partly good news: we can pat ourselves on the back because the mission has largely been accomplished. The downside is that there isn't much robust discussion or debate. This dearth of discussion is probably why many of the people who drove the site in its early days have left.

On the other hand there are many facets of amateur radio that have barely been discussed. (The only facet that seems to be really well represented is software-defined radio.) It would be nice to see more contesters, VHF/UHF enthusiasts, QRPers, and so on here. It seems to me that many of us migrated over from other Stack Exchange sites (as I did), but apparently the various mailing lists and forum sites are more appealing to hams who haven't crossed over from other SE sites. Perhaps we should all make an effort to attract more hams to come here.

Not the answer you're looking for? Browse other questions tagged .

Welcome!
This site is for discussion about Amateur Radio Stack Exchange. You must have an account there to participate.
Help
Visit chat

10
How can we improve the activity on this site?
2
beta status as of February 2020

6
Please increase the question limit during beta
2
Current Status from Area 51
4
Is anything ever closed?
0
Random terribrilliant idea: ask all the FCC exam questions here?
2
beta status as of February 2020
5
Later this year, hamSE may no longer be a beta site. What will happen?
3
Let's have our own community ads!
4
Announcing a Pro Tempore Moderator Election for 2021