Should we encourage the use of SI-units?

Ham radio and the internet are by definition international communication media.

Should we then encourage the use of the International System of Units at this site?

Would it be too much to ask to also mention lengths between parenthesis in meters when originally stated in feet? It would certainly be a courteous gesture to the non-US world, even though the current user base might be predominantly US at the moment.

After all, ham bands are denominated in meter and the speed of light in vacuum is used as the standard base for defining the metre.

A policy proposal could also be to allow for volunteers to make such edits or to make commentary remarks in that sense. I have seen a similar policy for a different issue being implemented successfully on tex.se.

Below is a world map of of metrication, colour-coded with the year of adoption of the metric system. 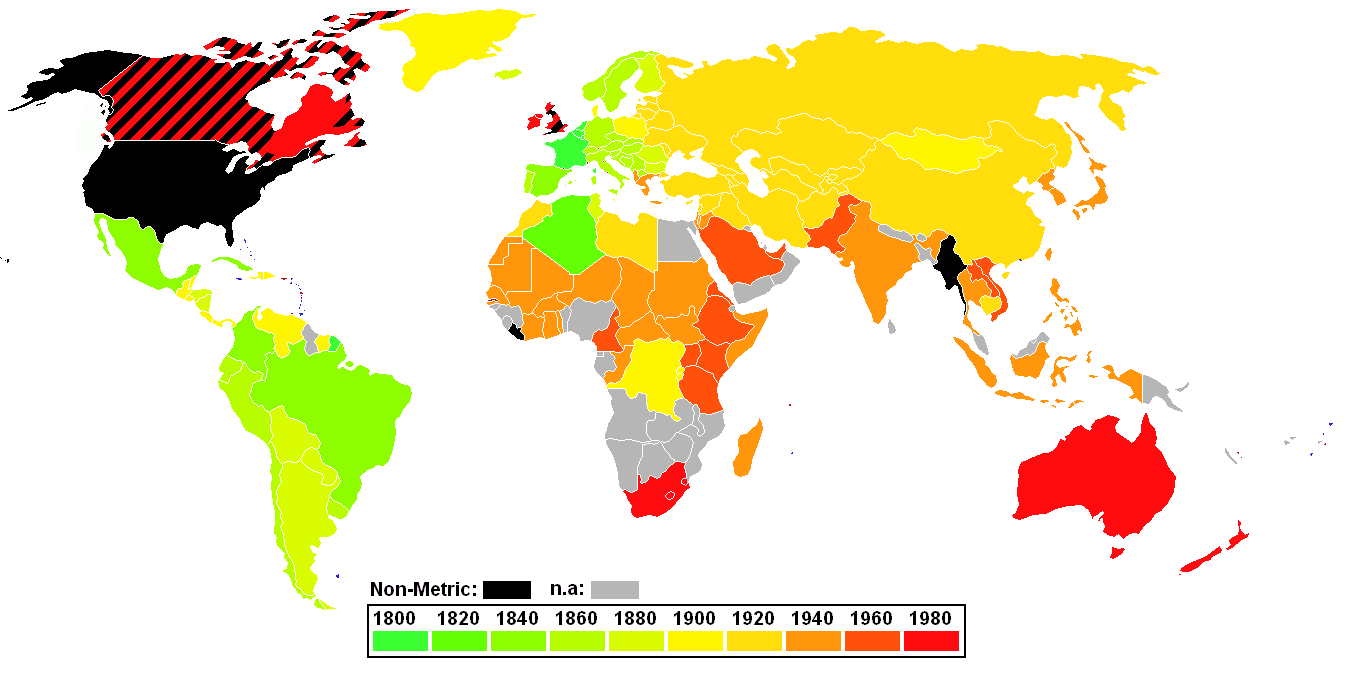 All comments are invited, but let us keep it decent...

I'm actually in disagreement with my fellow moderators here. The metric system is used by an overwhelming majority of the world's population. As said, both the Internet and amateur radio are inherently international in nature. Even in non-SI countries, SI units are frequently used (consider Hz and multiples thereof, or the measures of time which are multiples of seconds), and even US customary units are defined in terms of SI units. They are commonly used in electronics and technology, both of which relate closely to amateur radio. They have some significant advantages, not the least of which being that they often simplify calculations.

I'm not necessarily saying that we should encourage edits simply for converting from one system of units to another; good arguments have been made why edits making only such changes should probably be considered to be too minor. (Though if someone makes edits that significantly improve a post in other ways and also happen to include a conversion to the other system of units, I certainly wouldn't edit those conversions out of the edit.)

What I am saying is that we should consider the international reach of this site. We already have a number of members from all over the world, including (just to name a few) myself (Sweden), the OP (Belgium), VU2NHW (India), Pedja YT9TP (Serbia) and probably plenty more. Many more non-US visitors are likely to be familiar with the SI units than are familiar with US customary units. The number of people familiar with both systems of units would be even smaller, and my gut feeling is that this group would largely consist of certain portions of the population in the three major countries (US, UK, Canada) that to a lesser or greater extent use US customary units.

Yes, conversion factors are easy to come by. But if our goal is to build a collaboratively written and edited collection of knowledge on matters relating to amateur radio, I think it's unfair to say about such a simple thing as conversion factors between different systems of units one of which is used by something like 90-95% of the world's population that people can "just search for it".

My personal feeling of using only SI units is probably not realistic due to the admittedly large fraction of users here particularly from the US, so as a compromise, I propose the following:

I suppose an exception about the "edit is too minor" guideline could be made for posts that are already near the top of the front page, as bumping those again won't have significant impact on the visibility of them or other posts, but if we do that, it comes down very much to personal judgement of the person reviewing the edit, and personal judgement is always slightly iffy.

Trying to mandate courtesy measures (such as stating units in two unit systems) typically isn't very effective and would most likely simply lead to needless conflicts. As Dan has noted, it's fairly straightforward to convert units if you have access to an internet connection, and if someone takes the time to write out a post that uses non-SI units, they shouldn't feel compelled to convert it.

It is definitely not a good basis for editing posts, and honestly I'd probably refrain from even commenting on it; if you think an SI answer is significantly more useful, consider writing it up yourself.

I wouldn't recommend the use of edits simply to clarify units - at least not for questions ans answers. In the tag wiki space, where it's the product of the entire site rather than an individual user's post, then standardizing on metric might be OK. However, editing posts should only be done for significant reasons, which this certainly is not given how easy it is to convert mentally or with Google. An edit both sends a notification to the original poster and bumps the entire post, which is why proposed edits can be rejected for being too minor.

Not the answer you're looking for? Browse other questions tagged discussion etiquette policy .

The Overflow Blog
Featured on Meta

2
Should ticket-holders use a dummy call-sign user?
2
Should we use short or long tags for regional/country tags?
4
What should our policy be on “somewhat” broad questions?
1
Proposed close reason: impossible HF propagation questions
3
How to alienate people in the US
2
Too late to widen the scope of this SE?
3
Separate Morse tag to go along with the CW tag
3
2019: a year in moderation
3
2020: a year in moderation